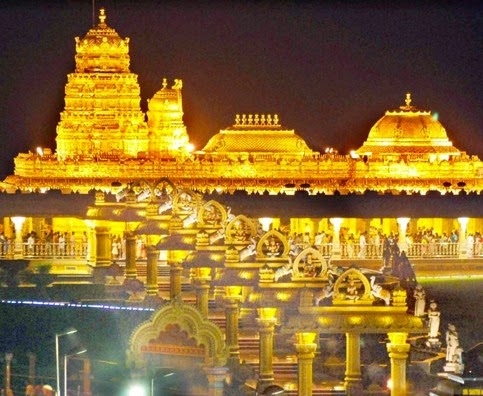 The Golden Temple of Sripuram is a spiritual park situated at the foot of a small range of green hills in a place known as “Malaikodi” in the city of vellore in Tamil Nadu. Golden Temple Vellore is also known as Sripuram Mahalakshmi Temple. An important feature is Sripuram Narayani temple or Mahalakshmi temple whose Vimanam and Ardha Mandapam is overlaid with gold inside the temple and exterior. The Temple is at the southern end of the city of Vellore at Tirumalaikodi. Tirumalaikodi is about 8kms from Vellore.

The Sripuram Golden Temple was built in a short span of 7 years. It was inaugurated on August 24,2007. The entire temple was designed by Amma, as conceived through the divine vision. Sri Narayani Peetam headed by a 31-year-old god man who calls himself as Narayani Amma. Devotees hail the temple as one of the wonders of the world and say that it is the only temple covered fully with gold. It is estimated that over 600 Crores of Indian Rupees was spent to construct a true golden temple for Goddess Mahalakshmi.

The crown of Sri Lakshmi Golden Temple is called “Vimanam” or “Ardha Mandapam”. This crown is one of the biggest temple crown in the history of architecture. The temple is the storehouse of the diety of Sri Lakshmi Narayani. Sripuram Golden Temple was built in a time frame of 7 years. This period is considerably small when considering the construction of other massive buildings and temples like Taj Mahal was completed in 22 years, Golden Temple, Amritsar was completed in around 10 years etc. The location of the temple has been decided by taking “Vastu” , which is a traditional Hindu system of architecture into account. Sri Lakshmi Golden Temple has been built in the center of a star-shaped path so that it absorbs a lot of positive energy from nature. This star-shaped path is called “Sri Chakra”. The path to the temple stretches for around 1.8 km.

The Vellore Golden Temple history elucidates that this location is a source of peace, tranquility and relaxation for the devotees. It is believed that ardent devotees who walk through this star-shaped path are blessed to read the messages of justice and truth which allow them to transform into powerful and supreme creatures. The penultimate goal is to kindle concrete faith in Almighty and the ultimate aim is to change people. The construction of this divine temple was led by Sri Sakthi Amma, who is said to have designed the temple through her the concept she received through her divine vision. Mahalakshmi Golden Temple Sripuram, is dedicated to the Goddess Lakshmi. Along with this, the very presence of Guru, Sri Sakthi Amma, who is worshiped by the devotees as their goddess also draws huge number of pilgrims to this temple.

Sri Sakthi Amma was born on the 3rd of January 1976, to Shri. Nanda Gopal and Smt. Jyothiamma. A distinct, divine ray of light (Namam) on the baby’s forehead was vividly visible, along with symbols of Chakra (Wheel) and Sanku (Conch) on either side of the chest. Through this, the divine connection was established and people recognized the child as very special. On many occasions, the child would be absent from school and would be found in temples or at other places where religious activities were being conducted.

On an auspicious day, the 16-year old child was commuting in a bus to school. He was sitting by the window and gazing at the sky. Suddenly, a ray of energy emerged from the child’s body, projected on the sky and formed an image of Goddess Narayani. Goddess Narayani was adorned in white, holding a ‘Sanku’ in her left hand and ‘Chakra’ in her right. A Lotus Flower was held in her third hand, while the fourth hand was held up in a gesture of blessing. After the form was revealed, it disappeared and the ray of energy returned into the child. It was thus an established fact from the very early age of Sri Sakthi Amma that a spiritual life was in store for the child.

Distance Between Tirupati to Vellore:

We are here to help you for visiting these places.Please visit http://tirupaticaars.com/tirupati-to-vellore-taxi-service/