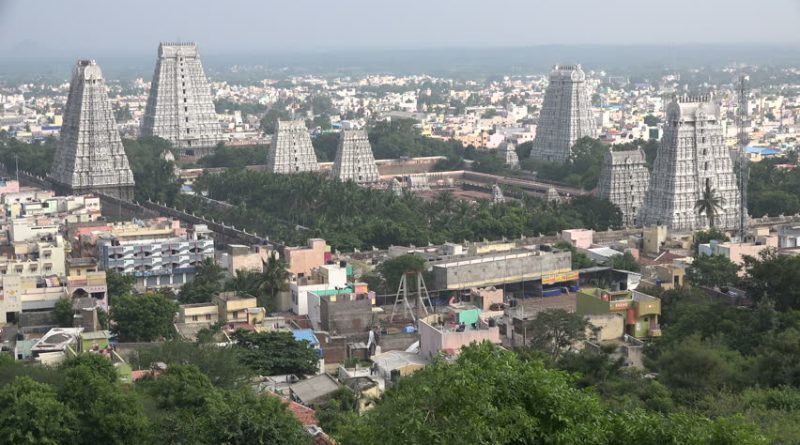 Arunachalam Temple is an important Shaivite temple dedicated to Lord Shiva which is located in the town of Thiruvannamalai in Tamil Nadu. It is significant of Saivism as one of the temples associated with the five elements, the Pancha Bhoota Stalas, and specifically the element of fire, or Agni.

Lord Shiva here at Annamalai temple is worshipped with the name Arunachaleswara or Annamalaiyar and Goddess Parvati is celebrated as Unnamalai Amman. Lord Shiva is worshipped in his Lingam form which is called as Agni Lingam. One of the well known traditions, here at the temple is “Giri Valam”. As per the tradition, one has to worship Lord by making rounds of mountain and the temple. A gigantic lamp is lit on the top of the mountain and the temple to observe the festival of Karthigai and devotees from across the country come here to dive into the celebration of the festival. Eight Lingas, one for each of the eight directions has been incarnated in the path of the Girivalam.

According to the Hindu mythology, Parvati, wife of Shiva, once closed the eyes of her husband playfully in a flower garden at their abode atop Mount Kailash. Although only a moment for the gods, all light was taken from the universe, and the earth, in turn, was submerged in darkness for years. Consequently Goddess Parvati had to perform penance for what she did inadvertently. Then her husband appeared as a column of fire at the top of Arunachala hills, returning light to the world. He then merged with Parvati to form Ardhanarishvara, the half-female, half-male form of Shiva. The Arunachala, or red mountain, lies behind the Arunachalesvara temple, and is associated with the temple of its namesake. The hill is sacred and considered a lingam, or iconic representation of Shiva, in itself.

According to the history,once Lord Vishnu and Lord Brahma had a quarrel, who is great among the two of them. As a result, they wanted to have a competition and asked Lord Shiva to be the judge of the competition. Upon which, Lord Shiva agreed and Shiva told them that the one who can reach the feet and the crown of the Shiva Lingam will be judged as the most powerful. And, consequently Lord Shiva got himself transformed into Jyothi Lingam and Agni Lingam.

Lord Brahma, at the same time also took the form of a swan so that he can fly and touch Lord Shiva’s crown. But even after flying for long years he could not reach to the crown and he found the thazhambu flower which was falling down and thus Lord Brahma asked the flower that how much time he will need to reach the feet of Shiva Lingam. The flower replied that, it has been falling down for last forty thousand years but then it has not yet been able to reach the foot of the Lord Shiva. Then Lord Bramha realized that, it is not really possible to reach the crown of Lord Shiva, Lord Brahma took the flower into confidence to be a witness of the fact that he had been successful in reaching the crown of the Lord Shiva and that he took the flower from there. Flower got convinced with the fact and went to Lord Shiva, along with Lord Brahma, understood the conspiracy they had done together and out of rage cursed Lord Brahma that he will never be worshipped anywhere on Earth by human being, and the thazhambu flower will never be used for worshipping any God.

Finally both of Lord Brahma and Lord Vishnu requested Lord Shiva to placate and transform to his Lingam form from the Agni form. It’s believed that, at the time of Kritayugam the mountain was in the fire form and in the form of Emerald form in Tretayugam, while it was in the form of Gold in Dwaparyugam and during Kaliyugam in the form of rock.

Distance Between Tirupati to Arunachalam:

We are here to help you for visiting these places.Please visit http://tirupaticaars.com/taxi-fares-to-thiruvannamalai-from-tirupati-tiurmala/